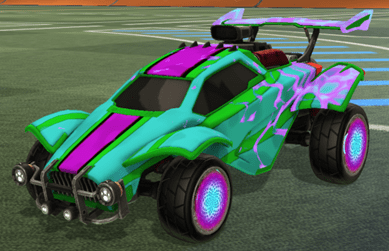 The Rocket League Spectre decal is a black market item that was released in Nitro crate during May 2017. It has no painted variants as it is only available in its default form.

On this Spectre information page, you can find out its prices, cool car designs with this decal, and how to get this item at the best price.

Get the Spectre Decal Here!

These are the default Spectre prices as there are no paints for this decal. All prices are in credits and are manually updated as often as possible.

Remember to vote for your favorite design!

Get the items used in these designs here! 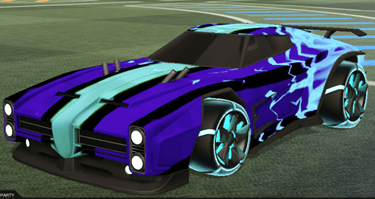 Why the Spectre is so important in your Car Design

Your selected Rocket League decal accounts for almost all of your car’s visual image and is therefore, the most important aspect of your car design.

When designing Rocket League cars, I always select the decal and its color before I choose the wheels. By following this method, it becomes easier and quicker to create your ideal car design.

How to get the Spectre in Rocket League

The blueprint crafting cost for the Spectre on all four platforms is 2,000 credits. When the Spectre was first released back in 2017, it was worth the equivalent to around 2,000 credits, just in keys as that was the in-game currency used at that time. However, it quickly dropped and has continued a slight fall since. That means you can trade the Spectre for a cheaper price than its blueprint cost.

Trading can be done by player-to-player trading. This is the best method especially if you already have the required amount of credits. If not, then you can buy Rocket League credits from Aoeah (see button links above).

Register For This Site

This website uses cookies to improve your experience while you navigate through the website. Out of these cookies, the cookies that are categorized as necessary are stored on your browser as they are essential for the working of basic functionalities of the website. We also use third-party cookies that help us analyze and understand how you use this website. These cookies will be stored in your browser only with your consent. You also have the option to opt-out of these cookies. But opting out of some of these cookies may have an effect on your browsing experience.
Necessary Always Enabled
Necessary cookies are absolutely essential for the website to function properly. This category only includes cookies that ensures basic functionalities and security features of the website. These cookies do not store any personal information.
Non-necessary
Any cookies that may not be particularly necessary for the website to function and is used specifically to collect user personal data via analytics, ads, other embedded contents are termed as non-necessary cookies. It is mandatory to procure user consent prior to running these cookies on your website.
SAVE & ACCEPT